Some viruses can provoke a chronic infection. They persist in tissues in spite of the immune response and notably the interferon response, which is a critical substance produced by our cells to control viral infections. By studying how viruses escape immune responses, we aim at better understanding the function of the immune system in order to enable the development of new treatments against immune dysfunctions and viral infections.

We are all bearing at least a dozen of viruses, which persist in our body in either a latent or an active form. Most of us (70% to 90%) harbour Herpes viruses such as Herpes simplex 1, responsible for cold sores, or Epstein-Barr virus, the agent of infectious mononucleosis (« kissing disease »), which occasionally provokes cancer or crippling central nervous infections.

While some persistent viruses don’t cause disease, others, like Hepatitis C virus or AIDS virus can induce serious chronic diseases.

From virus evolution to the understanding of the immune system

Owing to their rapid multiplication, viruses are likely the fastest evolving organisms. They remarkably adapt to their host and develop fascinating strategies to counteract immune defences. In particular, persistent viruses were found to express proteins that target key factors of the immune system.

Our research project is twofold : on the one hand, we study Theiler’s virus, a mouse picornavirus with a striking ability to persist in the central nervous system. Viral infection and the associated inflammatory response cause lesions that are reminiscent of the human multiple sclerosis. Our work focuses on the mechanisms used by the virus to persist and thus to escape the immune response. We analyse how some viral proteins interfere with the immune response, including the interferon response. On the other hand, we analyse the interferon response of the host, given its critical antiviral function.

Owing to their fast evolution, viruses developped fascinating strategies to infect and replicate in their host. To escape immune defenses, persistent viruses express proteins that evolved to target key components of the immune system.

The molecular virology group focuses on two topics related to the interplay between viral infections and the immune response of the host.

1. Theiler’s virus : We analyze the model infection of the central nervous system by Theiler's virus (TMEV or Theiler's murine encephalomyelitis virus). This virus can escape the immune defenses of the host and provoke a persistent infection of the central nervous system which can lead to a chronic demyelinating disease considered as a model of multiple sclerosis. We study the role of viral proteins that antagonize the innate immune response of the host, thus allowing the virus to persist.

2. Interferons (IFNs) : We analyze the innate immune response against viral pathogens in the particular context of the central nervous system. We focus our analysis on the type I interferon (IFN-α/β) and on the recently discovered type III interferon (IFN-λ) responses which are critically important to control viral infections and modulate the acquired immune response.

1. Persistent infection of the central nervous system by Theiler's virus

Theiler’s murine encephalomyelitis virus (TMEV or Theiler’s virus) is a murine picornavirus showing a striking ability to persist in the central nervous system of the host in spite of a specific cellular and humoral immune response. Persistence of the virus is associated with a strong inflammatory response and with lesions of primary demyelination reminiscent of those found in human multiple sclerosis (Brahic et al., Annu rev. Microbiol., 2005). Our work aims at understanding how a virus can persist in the central nervous system (CNS) of an immunocompetent host, thus evading the immune response.

We currently analyze the function of two viral proteins, namely L and L*, that are critical for persistence of the virus in the central nervous system though they are not required for replication of the virus in cell culture. Hence, these proteins are believed to interact with host factors in vivo and to counteract the host immune defenses.

L Protein: The leader (L) protein encoded by Theiler's virus is a 76 amino acid-long peptide containing a zinc-binding motif. In spite of its small size, this protein exerts several important activities. It inhibits the production of IFN-α/β by infected cells (van Pesch et al., J. Virol. 2001), affects the nucleo-cytoplasmic trafficking of host proteins (Delhaye et al., J. Virol. 2004) and prevents the formation of stress granules (Borghese et al. J. Virol. 2011). A structure-function analysis of the L protein is underway to identify the functional motifs of the L protein and to further decipher its mode of action.

L* Protein: Protein L* of Theiler's virus is unique among picornaviruses in that it is translated from an alternative open reading frame overlapping the ORF encoding the viral polyprotein. Translation of both the viral polyprotein and the L* protein depends on a Ribosome Internal Entry Site (IRES) located in the 5' non-coding region of the genome.  We showed that the L* protein is required for long term persistence of the virus in the central nervous system. In vitro, L* facilitates the infection of macrophages (van Eyll et al. J. Virol. 2000, 2002). L* is partly cytosolic and partly anchored in the mitochondrial outer membrane (Sorgeloos et al., J. Virol. 2011). In the cytosol, L* inhibits the activity of RNase L, one of the best-characterized effector of the IFN response (Sorgeloos et al., PloS pathog. 2013 ; Drappier and Michiels, Curr. Op. Virol. 2015).  We currently analyze the mechanisms of RNase L inhibition.

Type I interferons (IFNs) are a family of cytokines that play a critical role in the defense of the organism against viral infection. In spite of their sequence divergences, all type I IFNs (IFN-α, IFN-β, IFN-κ, IFN-ε IFN-ω...) bind the same heterodimeric receptor made of the IFNAR-1 and IFNAR-2c subunits. IFN binding to the receptor activates the JAK/STAT pathway and triggers the transcriptional upregulation of many genes called ISGs (Interferon Stimulated Genes). The proteins encoded by these genes (Mx, PKR, OAS...) are responsible for the antiviral, cytostatic and immunomodulatory activities of type I IFNs. However, dysregulation of IFN production can have adverse effects and induce diseases referred to as interferonopathies. We currently analyze gene mutations responsible for the Aicardi-Goutières syndrome, where excess IFN production is responsible for a crippling developmental disease.

Type III IFNs (also called IL-28/IL-29 or IFNs-λ) were discovered recently. They bind to a receptor distinct from that of type I IFNs, made of the IL10Rβ and IL28Rα subunits. In spite of this different receptor usage, type III IFNs activate the same signal transduction pathway as type I IFNs and activate the same set of interferon stimulated genes.   Our group analyzes the reason for the multiplicity of type I IFN genes and for the apparent redundancy of the type I and type III IFN systems.

Expression of IFNAR, the type I IFN receptor is widespread and most cells of the body can respond to these IFNs. In contrast, the response to IFN-λ exhibits striking tissue and cell specificity. In the analyzed tissues, response to circulating IFN-λ was restricted to epithelial cells (Sommereyns et al., PloS Pathog. 2008). This suggests that IFN-λ evolved as a specific protection of epitheliums and mucosae. Accordingly, IFN-l was shown to exert a major role in the defense against rotavirus infection (Pott et al., PNAS 2011). Our current research work addresses the relevance of such tissue and cell specificities of IFN responses (for review, see Hermant et al., J. Innate Immun., 2014).

Production of IFNs in the CNS :  We observed that the relative production of IFN-λ (over that of IFN-α/β) was low in the brain of mice infected with neurotropic viruses. Thus, the central nervous system appears to be both a poor producer of IFN-λ and a poor responder to this cytokine.  In contrast, IFN-α/β is readily produced in the central nervous system and we showed that neurons were able to contribute to the production of these IFNs (Delhaye et al., PNAS, 2006) although they appear to be much less potent than astrocytes at producing IFN (Pfefferkorn et al., J. Virol . 2015). Neurons also appear to have a restricted IFN response, some ISGs, such as Apolipoprotein L9, being specifically not or little expressed in neurons (Kreit et al. J. Virol. 2014).

Their difficult development explained by Thomas Michiels, who studies a promising avenue of research

What do we know about the SARS-CoV-2 coronavirus?

Thomas Michiels describes the origins and the characteristics of this virus

An EOS project coordinated at the de Duve Institute

Apolipoprotein I9 is implicated in protection against viruses.

A discovery from the group of Thomas Michiels was recently published in the Journal of Virology. 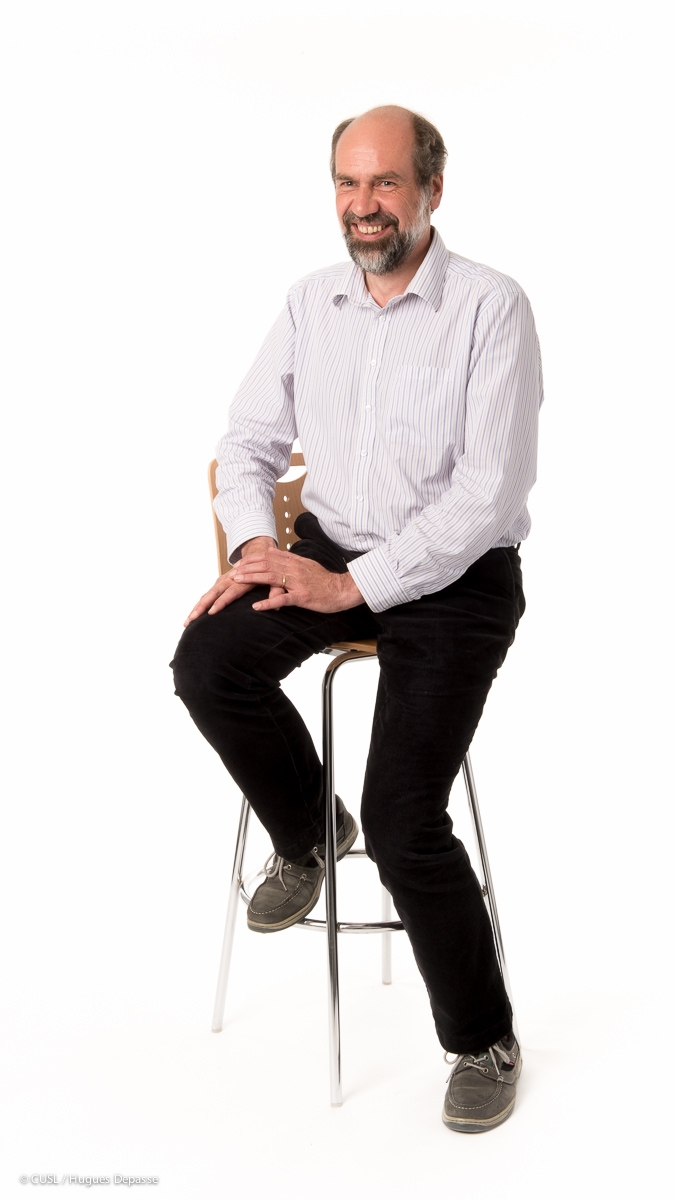