The emergence of bacteria resistant to all of the available antibacterial agents calls for the urgent development of new molecules to fight bacterial infections. The goal of our laboratory is to understand how bacterial cells respond to toxic compounds present in the environment in order to improve our ability to combat them.

Antibiotic resistance has become a worldwide problem that threatens the effectiveness of many medicines used today to treat bacterial infections. In recent years, outbreaks involving strains resistant to all known antibiotics, sometimes called "killer bacteria" or "superbugs", often made ​​the news because these bacteria render infections difficult, if not impossible to treat. It is therefore urgent to expand the arsenal of available antibacterial molecules by identifying new targets for the development of new antibiotics.

Our laboratory wants to contribute to the global effort aiming to prevent the return of untreatable epidemics by better understanding how bacteria defend themselves against the toxic molecules present in their environment, including antibiotics. In other words, we want to understand how bacteria respond to the different stress to which they are exposed. The primary goal of our research is fundamental: we want to elucidate the mechanisms of stress response. However, our research will also provide the knowledge required to develop new antibiotics.

In our lab, we study the mechanisms that allow proteins to fold correctly in the envelope of Gram-negative bacteria. In particular, we study the pathways of disulfide bond formation and the periplasmic chaperones.

We are also interested in the systems that allow bacteria to "feel" that their cell envelope is damaged and to respond by producing proteins or other molecules that repair the damages.

2) How bacteria fight against oxidative stress?

One of the favorite topics of our laboratory is to study the bacterial defense mechanisms against oxidative stress. Oxygen is essential for life on earth. But there is a price to pay, as reactive oxygen species damage cellular components such as proteins and DNA, contributing to aging and potentially leading to cell death. In our lab, we try to understand how bacteria defend themselves against oxidizing molecules, such as bleach and hydrogen peroxyde.

We recently discovered a new pathway that allows bacteria to protect their proteins forming sulfenic acids. We are currently trying to identify new pathways regulated by sulfenylation . This project is funded by the European Research Council.

2.2. Characterization of new ways to fight against oxidative stress

An important objective of our group is to discover new protection mechanisms against oxidative stress. In particular, we want to discover new enzymes that protect the methionine residues of proteins. This project is also supported by the European Research Council.

The cell envelope is a permeability barrier that is essential for the viability of Gram-negative bacteria and protects them against toxic compounds, including antibiotics. In order to maintain envelope integrity, the proteins secreted to this compartment need to fold into their unique three-dimensional structure and, once folded, to be protected from irreversible damages by environmental stress. Despite the crucial importance of protein assembly and protein protection for cellular viability, little is known about these processes in the cell envelope. Our overall goal is to understand protein folding and protein repair in this extra-cytoplasmic compartment. In particular, we want to contribute to a better understanding of the systems that allow bacteria to respond to stress in their cell envelope. We use Escherichia coli and Caulobacter crescentus as experimental models to uncover new pathways and mechanisms. We mostly study the response to oxidative stress and to general envelope stress. Our rechearch should open the way to the design of new antimicrobial drugs.

The primary oxidant present in the bacterial periplasm is the soluble protein DsbA. DsbA has a CXXC catalytic site motif present within a thioredoxin fold. The cysteine residues of this motif are found oxidized in vivo. The disulfide bond of DsbA is very unstable and is rapidly transferred to secreted unfolded proteins. DsbA is then re-oxidized by the inner-membrane protein DsbB that transfers electrons from DsbA to the electron transport chain (Figure 1).

Legend:
Disulfide bond formation in the E. coli periplasm. Disulfides are introduced into folding proteins by DsbA. DsbA is re-oxidized by DsbB. Electrons flow from the reduced proteins to the CXXC motif of DsbA and then to DsbB. DsbB transfers electrons to the respiratory chain (adapted from (1)).

DsbA is a very powerful oxidant that apparently lacks proofreading activity. If the native disulfide bond pattern involves cysteine residues that are non-consecutive in the amino-acid sequence, DsbA can form incorrect disulfides. The correction of these non-native disulfides is the role of a disulfide isomerization system. This system involves a soluble periplasmic protein disulfide isomerase, DsbC (Figure 2). Like DsbA, DsbC presents a thioredoxin fold and a CXXC catalytic site motif. In contrast to DsbA, the CXXC motif of DsbC is kept reduced in the periplasm. This allows DsbC to attack non-native disulfides, a necessary step in the isomerization reaction. The protein that keeps DsbC reduced is the membrane protein DsbD. DsbD transfers reducing equivalents from the cytoplasmic thioredoxin system to the periplasm via a succession of disulfide exchange reactions.

Legend:
Disulfide bond reduction/isomerization in the periplasm. DsbA can introduce non-native disulfides when they need to be formed beween non-consecutive cysteines. Incorrect disulfides are either isomerized or reduced by DsbC. Oxidized DsbC is regenerated by the membrane protein DsbD that transfers electrons from the cytoplasmic thioredoxin reductase (TR) / thioredoxin (Trx) system to the periplasm (from reference 1).

See the Institute report for a summary of our most important findings. See also the list of our publications on that topic. Our current projects on the Dsb proteins include the characterization of DsbD and of the machinery at work in bacteria other than E. coli.

The thiol group of the amino acid cysteine is found in vivo under various oxidation states. This versatility allows cysteine residues to be at the heart of numerous cellular processes by stabilizing protein structures or by fine-tuning protein activity. Some cysteine residues play an essential role in catalysis and in thiol-disulfide exchange reactions by cycling between the thiol state and the disulfide bonded state, such as in ribonucleotide reductase. Another class of cysteine residues is found in many extracellular proteins, which do not benefit from the surveillance of the cellular chaperones and other protection mechanisms. Here, cysteines form disulfide bonds that stabilize protein structure and protect the thiol group from over-oxidation (see above). More recently, some cysteine residues have been shown to play a regulatory role and mediate cellular signaling. For instance, oxidation of cysteine residues to sulfenic acid (-SOH) turns off the activity of protein tyrosine phosphatases. It is now clear that complex enzymatic systems control the oxidation state of cysteine residues, either by reducing or oxidizing them depending on the identity of the protein target, the subcellular compartment and the redox properties of the environment. In our group, we study the mechanisms that regulate the formation of sulfenic acids by reactive cysteine residues under oxidative stress conditions. We also aim at identifying new enzymes involved in the defense mechanisms against oxidative stress.

Within proteins, cysteine residues are sensitive to oxidation by reactive oxygen species (ROS). The first oxidation product of cysteines exposed to ROS is the sulfenic acid derivative (-SOH). Sulfenic acids are highly reac- tive intermediates that, unless they are stabilized within the protein microenvironment, react with another cysteine present in the vicinity to form a disulfide or are further oxidized to the irreversible sulfinic (-SO2H) and sulfonic (-SO3H) acid modifications. Sulfenic acid formation has traditionally been viewed as an unwanted reaction opening the way to damages that are harmful to proteins. However, it has become clear in recent years that formation of sulfenic acids is not always deleterious to the cell. A new concept is emerging, in which sulfenylation of specific cysteine residues modulates signal transduction pathways by altering the activity and function of cellular proteins, just as phosphorylation and dephosphorylation cycles regulate enzyme activities and cellular pathways. However, the modulation of protein function by sulfenic acid formation has been unambiguously shown for only a few proteins. We postulate that specific oxidation of cysteine residues via sulfenylation modu- lates the activity of many more proteins and pathways and that numerous sulfenylation sites have not yet been recognized. We are applying an unprecedented multi-facetted approach to fully grasp the physiological scope of cysteine sulfenic acid formation by uncovering the sulfenome of a living organism, using Escherichia coli and Caulobacter crescentus as models. The main objectives of our research program are (1) to comprehensively characterize the sulfenome of these bacteria 2) to identify new proteins and pathways regulated by sulfenylation and (3) to understand how sulfenylation is controlled at the cellular level. processes and pathways, opening up new avenues of investigation.

See the Institute report for a summary of our most important findings. See also the list of our publications on that topic.

The envelope of Gram-negative bacteria is a complex macromolecular structure that serves as a permeability barrier protecting bacterial cells from ever-changing environmental conditions. In order to maintain envelope integrity, Gram-negative bacteria have evolved complicated signaling systems that allow them to react to a range of envelope stresses by modulating the expression of specific genes. Several envelope stress response systems have been described in Escherichia coli, including the Rcs phosphorelay.

The Rcs phosphorelay was first identified by its role in the transcriptional regulation of genes involved in the biosynthesis of colanic acid, a capsule polysaccharide that is produced by bacteria in response to envelope perturbations, osmotic stress and growth on surfaces. In addition to its role in controlling capsule synthesis, the Rcs phosphorelay is also required for normal biofilm formation, contributes to antibiotic resistance and regulates virulence-associated structures involved in motility and host recognition.

The Rcs phosphorelay is a complex signaling pathway that comprises three proteins, RcsC, RcsD and RcsB. RcsC is an inner membrane sensor that is predicted to autophosphorylate in response to environmental signals. The phosphoryl group is then transferred to a second inner membrane protein RcsD, and then finally to RcsB, a cytoplasmic response regulator. Phosphorylation of RcsB allows this protein to bind to target promoters on the chromosomal DNA via a DNA binding domain.

In addition to RcsC, RcsD and RcsB, the Rcs phosphorelay involves auxiliary proteins that are required for the normal functioning of the system. One of those auxiliary proteins is RcsF, a 14 kDa lipoprotein which is anchored in the outer membrane and oriented towards the periplasm. The function of RcsF is to transduce signals that this protein perceives in the outer part of the envelope to RcsC. For instance, treatments that alter the integrity of the outer membrane or that target the peptidoglycan layer, activate the Rcs phosphorelay and this induction has been shown to be dependent on RcsF.

Despite the important role played by the Rcs phosphorelay in monitoring envelope integrity, in biofilm formation and in bacterial virulence, we still have a poor understanding of the molecular mechanisms that activate the system and control its correct functioning. In particular, the physiological signals that turn on the Rcs phosphorelay remain unknown and how the outer membrane protein sensor RcsF transfers environmental signals to RcsC is not understood. One of the objectives of our laboratory is to identify the molecular signals that activate the Rcs phosphorelay and to understand how the information is transferred from one component of the pathway to another. See our publication on that topic.

A discovery by Jean-François Collet and his collaborators

Results published by J.-F. Collet and F. Barras in the prestigious journal Nature

SH Cho and JF Collet, with two groups at Harvard Medical School, report the structure of the membrane protein CcdA. 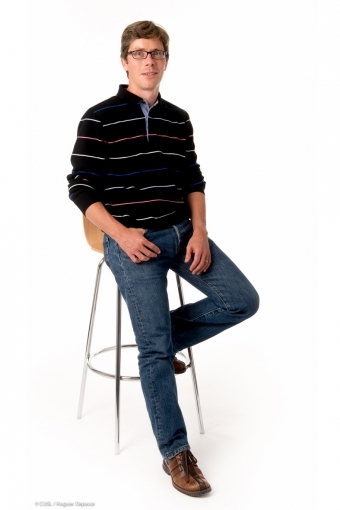 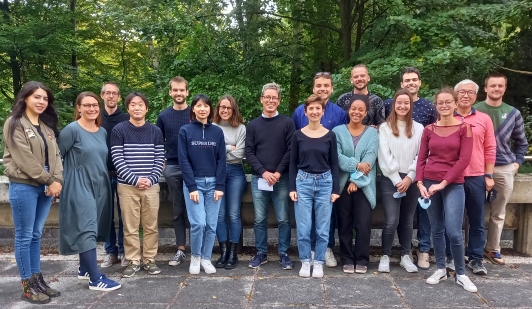