Our work is focused on the elucidation of inborn errors of metabolism, i.e. diseases due to a genetic defect making that an enzyme of intermediary metabolism is deficient. In this context, one of our goals is to identify the gene encoding enzymes for which this identity is unknown. Another goal is to identify new enzymes, most particularly ‘metabolite repair enzymes’.

Our cells are chemical factories that make hundreds of compounds thanks to enzymes, each of which allows a specific chemical reaction to proceed. Enzymatic reactions are organized in ‘pathways’, that allow the conversion of a major molecule into another one. A well-known example of metabolic pathway is glycolysis, which allows us to extract energy from glucose while converting it to pyruvate thanks to ten successive enzymatic reactions. All together, enzymatic reactions and the metabolic intermediates they form make up what is known as intermediary Metabolism.

Diseases of intermediary metabolism are known as inborn errors of metabolism. Each of them is due to mutations in the gene that encodes an enzyme involved in intermediary metabolism. In most cases, the mutations make that the enzyme is inactive or less active than normal. This enzyme deficiency interrupts the flow of metabolites in the metabolic pathway to which the enzyme belongs. Just as when a dam is built in a river, the water level will increase upstream and will decrease downstream, the metabolites upstream of the enzymatic block accumulate and those downstream of the block become scarce. The accumulation of some metabolites may have toxic effects. The absence of the endproduct of the pathway may also be a problem, which in some cases can be solved by providing supplements of the endproduct. Thus, defects in the synthesis of the amino acid L-serine can be treated by providing supplements of this amino acid in the food. All this shows how important it is to determine the exact location of the metabolic block in a patient with an inborn error of metabolism, because this information is of tremendous help for his/her treatment.

Diagnosis of enzyme defects relies more and more on the identification of mutations in the genome : if we know the function of the enzyme that is mutated, we have a diagnosis.  Unfortunately, for quite a few enzymes that we know to be present in our cells, we simply do not know the encoding gene. Even worse, we are probably still ignoring the existence of numerous enzymes that participate in intermediary metabolism. Filling these two gaps is the goal of our research. As an example, we have identified the gene encoding the enzymes that destroy L-2-hydroxyglutarate, D-2-hydroxyglutarate, and phosphohydroxylysine, and the enzyme that makes N-acetylaspartate. Thanks to this information, the corresponding metabolic diseases, in which L-2-hydroxyglutarate, D-2-hydroxyglutarate, and phosphohydroxylysine accumulate or N-acetylaspartate is deficient, can be diagnosed by mutation search on genomic DNA.

Identifying totally new enzymes is our other goal. In that respect, we have recently discovered what we have called ‘metabolite repair’ enzymes. The starting point of this discovery was a metabolic disease, L-2-hydroxyglutaric aciduria, in which a metabolite (L-2-hydroxyglutarate) that does not belong to a classical metabolic pathway accumulates. It turned out that this metabolite is made by a ‘side activity’ of an enzyme that serves to make another metabolite (L-malate). As we cannot prevent this enzyme from making this mistake, we have a ‘metabolite repair’ enzyme that destroys the abnormal metabolite. If this enzyme is missing, L-2-hydroxyglutarate accumulates and damages the brain. Knowing that numerous enzymes (slowly) catalyze side-reactions, we have searched for new metabolite repair enzymes. We have in this way discovered several new enzymes.

Following the discovery of the mechanism of the disease by Veiga-da-Cunha, Van Schaftingen and their collaborators

discovered by the teams of G. Bommer and E. Van Schaftingen 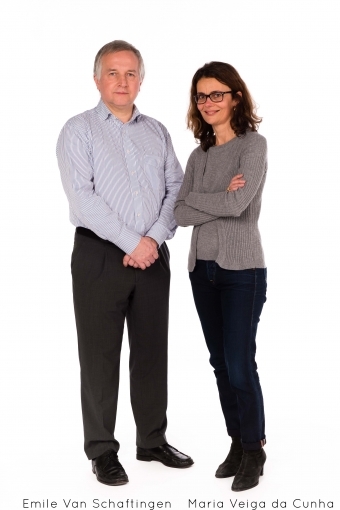