In our organs, cells are embedded in an extracellular matrix, a scaffold made of various macromolecules, among which the collagens. We aim at understanding how cells remodel or renew their surrounding extracellular matrix. We focus on changes occurring in the uterine mucosa, the endometrium, especially during cyclical menstruation or in related pathologies such as abnormal bleeding and endometriosis.

The extracellular matrix is a dynamic structure

Our organs are made of cells surrounded by extracellular matrix (ECM). The ECM plays a central role in the structural and functional organization of tissues and organs. ECM components, in particular collagens, are the most abundant proteins of the human body. The ECM not only ensures cohesion between cells but also constitutes a pool of signaling molecules and interacts dynamically with surrounding cells. Throughout human life, cells produce and secrete ECM components as well as enzymes able to operate specific cuts. ECM synthesis and breakdown must therefore be tightly controlled locally to ensure optimal ECM composition correlating with organ structure and function. To this aim, cells must generally integrate various regulatory signals including the contact with the ECM, molecular messengers originating from surrounding cells and circulating hormones. Some diseases result from an imbalance between ECM synthesis and degradation, for instance osteoporosis (excessive degradation) or osteopetrosis (excessive synthesis). Moreover local events of ECM remodeling are required for the development of several pathologies, including tumor progression and metastasis.

Cyclical renewing of the human endometrium

The human uterus is a remarkable organ. About every month during the active sexual life, the uterine mucosa (the endometrium) undergoes a cycle of repair, thickening, modifications to allow implantation of an embryo, and partial degradation if no implantation occurs. This menstrual cycle is orchestrated by variations in the concentration of the sexual hormones estrogens and progesterone. In brief, estrogens production a few days after the onset of menstruation induces thickening of the endometrium. About ten days later, a surge in progesterone concentration induces modifications of the endometrium. These modifications aim at facilitating anchorage and implantation of an embryo from the endometrial surface, a feature required for further development.  If implantation occurs, cells of the placenta ensure that progesterone production is maintained throughout pregnancy. But in the absence of implantation, estrogen and progesterone concentration falls down in the circulation and in the target organs. In the uterus, this signal triggers rapid degradation of the endometrial ECM, leading to shedding of superficial parts of the endometrium and rupture of small blood vessels. In the early 1990’s, our laboratory has discovered that the destruction of the endometrial ECM at menstruation is due to the action of a class of enzymes, the so-called matrix metalloproteinases (MMPs). The importance of the local control is here perfectly illustrated. Indeed, despite the aggressiveness of the secreted enzymes, the extent of the tissue destruction remains tightly limited at the cellular scale and the remaining part of the uterus is not damaged at all during menstruation. Tissue debris and blood are then eliminated outside the body. Synthesis of a new ECM and tissue repair (most often scarless) already begin during menstruation and a new cycle of growth and modifications can start.

In patients suffering from abnormal uterine bleeding, the endometrial ECM degradation escapes hormonal control and occurs outside the expected period. Failing mechanisms are not yet clearly identified.

In patients with endometriosis (about 10 % of the female population), small endometrium pieces are found outside the uterus, especially in the peritoneal cavity where the ovaries are located. A likely source of these tissue implants results from retrograde migration (against usual flow) of menstrual endometrial fragments in the fallopian tubes. The endometriosis lesions are not problematic by nature. However, they can cause discomfort and pain depending on their place of engraftment and because they continue to change cyclically in response to fluctuations in levels of sex hormones reaching the lesions through the bloodstream. Endometriosis is also associated with infertility by as yet poorly understood mechanisms. They could be linked to inflammation of the peritoneal cavity induced by endometriotic lesions. They could also involve abnormalities of the endometrium in situ.

The overall objective of our research is to understand the molecular mechanisms by which endometrial cells control the degradation and early repair of the ECM during menstruation. By extension, we also seek to determine how the failure of these mechanisms contributes to the onset of abnormal uterine bleeding and endometriosis.

However, overt menstruation (i.e. with external bleeding) occurs only in women and in a very limited number of other evolutionary related species such as apes (chimpanzee, orangutan,...). Unlike other research teams studying the endometrial remodeling of the mouse, which limits the extrapolations to humans, we chose to perform our experiments only on specimens from human hysterectomy (surgical ablation of the uterus). This specificity is allowed by our close proximity with the Ob-Gyn department at the Saint-Luc clinics. Since our discovery of the important role of MMPs, our research has identified a number of molecules acting as local regulators of the production or activity of these MMPs in response to hormonal fluctuations, essentially cytokines, including interleukin-1α, TGF-β and Lefty-A. We recently decided to also focus on the transition between degradation and early repair of the ECM during menstruation.

In summary, we hope that the results of our basic research will help to identify new therapeutic approaches for endometrial pathologies, but we also strive to extrapolate our findings to non- uterine pathologies resulting from an imbalance between synthesis and degradation of the ECM.

The extracellular matrix (ECM) plays a central role in the structural and functional organization of tissues and organs. ECM degradation is the initial step of physiological tissue remodeling and requires a tight regulation that is escaped in several pathologies. The cycling human endometrium is a remarkable example of physiological ECM remodeling under hormonal control and represents a unique experimental model to investigate underlying mechanisms. Our laboratory was the first to demonstrate that menstrual bleeding is due to a dramatic change in the focal expression and/or activation of enzymes called matrix metalloproteinases (MMPs). Our current investigations aim at (i) clarifying the mechanisms of local regulation of tissue remodeling in the cycling human endometrium, in particular through cellular interactions, (ii) investigating the role of MMPs in abnormal uterine bleeding by developing a model of human endometrial xenografts in immunodeficient mice and (iii) investigating the control of local MMP activity by individual cells, in particular through cell membrane binding and endocytosis. Our experimental strategies combine various technologies including morphological and biochemical examination, cell and explant culture, animal model, molecular biology, confocal microscopy, …

Both endocrine and paracrine factors participate in controlling the expression of MMPs involved in menstrual breakdown of the human endometrium. Several genes encoding MMPs and cytokines show maximal endometrial mRNA concentrations around menstruation. However, their expression profiles substantially diverge during the other phases of the cycle, indicating a differential response to the ovarian steroids, estradiol and progesterone. Moreover, menstrual breakdown is limited to the superficial part of the endometrium, further suggesting the contribution of local regulators that integrate hormonal impregnation and local environmental changes. We recently compared the transcriptome of the superficial and basal layers of the menstrual endometrium. The data suggested new potential actors of the regulatory network at menstruation, not only for tissue breakdown but also for early tissue repair.

Metrorrhagia, i.e. abnormal endometrial bleeding, occurs spontaneously in many women without obvious organic lesions and is more frequent in patients on long-term progesterone contraception. In both conditions, we found that metrorrhagia is associated with menstrual-like stromal breakdown, particularly in foci containing low levels of ovarian steroids receptors, correlating with increased expression and activity of several MMPs. We have recently developed endometrial xenografts in immunodeﬁcient mice. This new experimental model should enable us to further investigate the mechanisms of physiological and abnormal endometrial bleeding, endometrial angiogenesis and vessel maturation through pericyte recruitment.

After activation, MMPs activity is generally controlled by soluble inhibitors (TIMPs) but can also be regulated by endocytosis. Looking at mechanisms of MMPs clearance, we found that RAP, a natural antagonist of the low-density lipoprotein receptor-related protein (LRP-1), causes a strong accumulation of some MMPs in the conditioned medium of endometrial explants. Although LRP-1 mRNA is fairly stable during the menstrual cycle, the protein level of LRP-1 is minimal at menses. Thus, LRP-1-mediated endocytosis of MMPs could represent an additional regulatory mechanism of MMPs activity during the menstrual cycle, in synergy with TIMPs. Current projects aim at investigating the mechanisms of post-translational control of LRP-1. 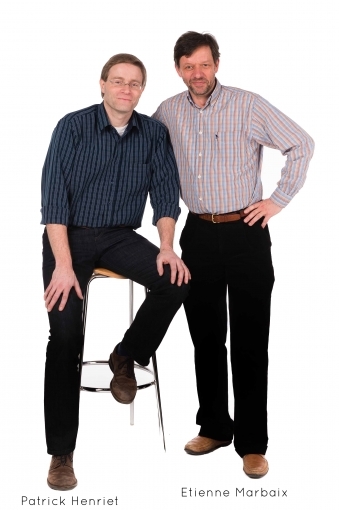