Link to our page Laloux Lab

The long-term goal of our lab is to understand how bacteria organize their cellular content in space and time to achieve various and complex lifestyles. Acquiring fundamental knowledge on the cell biology of bacteria is a prerequisite for many clinical applications, including the fight against pathogenic strains, the development of solutions to the rise of antibiotic resistance, and the appropriate use of bacteria with beneficial roles in the human body.

The remarkable architecture of bacterial cells

Bacterial cells were long considered as simple bags of randomly distributed molecules, because of their relative small size and the general absence of intra-cytoplasmic organelles. Over the past decades, tremendous advances in microscopy and genetic engineering – including the possibility for researchers to label proteins of interest with fluorescent molecules – have revealed instead that bacterial cells organize their intracellular content in the most exquisite manner. For instance, specific proteins or gene loci occupy non-random positions inside the cell, such as the cell poles (the extremities of the cell) or the site of cell division. Moreover, such localization patterns are often dynamic: molecules change place in a highly-regulated manner as the cell cycle progresses. This spatio-temporal organization of the cell is actually essential for bacterial life and allows bacteria to fulfill their cell cycle (i.e. from “birth” to the generation of daughter cells) in the most efficient way.

Extensive studies of the subcellular localization of various molecules have revealed the intricate molecular mechanisms that regulate fundamental processes in several model species, such as the binary cell division, the replication and partitioning of the DNA content, and cell elongation, which are now considered as textbook knowledge.

However, “non-canonical” species, which represent most of the bacterial life on Earth, have largely escaped the focus of the bacterial cell biology field, in part because of their higher biological complexity or less convenient laboratory manipulation.

Our objective and model

Our goal is to uncover how these bacterial cells organize their molecular content in space and time to achieve key steps in their fascinating lifecycles. In particular, we focus on the model predatory bacterium Bdellovibrio bacteriovorus, which feeds upon other Gram-negative bacteria, for two main reasons:

1) B. bacteriovorus is a promising alternative to antibiotics, since this bacterium efficiently kills a vast number of other Gram-negative bacteria (including several pathogens that are frequently associated with antibiotic-resistance in human infections), while being harmless for eukaryotic (e.g. human) cells. Predation was also shown to be efficient on bacteria embedded inside biofilms, these structured bacterial communities that largely contribute to multi-resistant nosocomial infections.

2) B. bacteriovorus has an original cell cycle (See Figure), in which it enters inside the envelope of a prey bacterium (e.g. E. coli or other species), which is remodeled to become a stable niche. The predator then digests the cellular content of the prey from the inside, and grows as a filament which eventually releases a variable number of daughter cells by a process of non-binary division (unlike most model bacteria, which divide by binary fission).

Legend - A. Schematic representation of the cell cycle of the predatory bacterium Bdellovibrio bacteriovorus. B. Microscopy image showing an E. coli cell (phase contrast, appears in black) that is contacted by B. bacteriovorus (red fluorescence). C. Selected time points during bacterial predation (from time-lapse microscopy on live bacteria), showing the growth of the B. bacteriovorus cell into a filament, at the expense of the infected E. coli cell. Daughter cells are released after about 4 hours.

This remarkable bacterium, first discovered in the 1960’s, is attracting a revived attention because of its promising “living antibiotic” potential. However, the molecular factors that govern the non-canonical biology of B. bacteriovorus, which stands in sharp contrast with the textbook knowledge, are still largely unknown. Yet, discovering the molecular determinants underlying the cell cycle of B. bacteriovorus is a prerequisite to understand how it thrives inside its prey and to envision the use of this bacterium as a therapeutic agent in the future. In our lab, we use a combination of techniques, including bacterial genetics, molecular biology and live quantitative microscopy at high resolution, to unravel the novel mechanisms that control key processes of the outstanding cell cycle of this small predator.

come back soon for more information...

An ERC Starting Grant at the de Duve Institute! 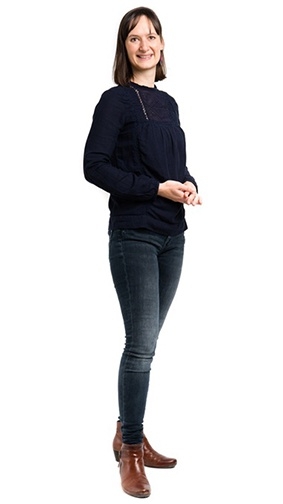