Anabelle Decottignies elevated to the rank of Officer of the Walloon Merit, category Sciences

On Thursday, December 14, the Walloon government has elevated Anabelle Decottignies to the rank of Officer of the Walloon Merit for the research she has been conducting "for 15 years on the mechanisms of cancer cells that allow them to acquire the "eternal youth" permitting them to divide without limit".

For fifteen years, Anabelle Decottignies' group has been interested in telomeres, specialized structures at the end of each of our chromosomes. Telomeres are termed biological clocks, because the "youth" of our cells depends largely on the state of our telomeres. The older we get, the more our telomeres wear out, leading to cellular aging and to loss of tissue renewal capacity, which means, for example, a decrease in immunity or healing efficiency. These mechanisms of cellular aging have yet a protective effect because, by limiting cell divisions, they present an obstacle to the development of tumors. Nevertheless, cancer exists and the risk of suffering from cancer increases with age. At the end of the last century, this apparent paradox was solved by the demonstration that cancer cells manage to ensure their "eternal youth" by reactivating embryonic mechanisms for maintaining telomeres, asleep in adult cells. These major discoveries were rewarded by the Nobel Prize for Medicine in 2009.

Work carried out by Anabelle Decottignies' laboratory and, concomitantly, by Prof. Roger Reddel's group in Sydney, has shown that for certain cancers that affect children, such as neuroblastoma or melanoma, the process is different since, in these situations, cancer seems to be able to develop from cells that have very long telomeres and therefore do not need to wake up these embryonic mechanisms of telomere maintenance, thus facilitating the tumor process. These discoveries are of great importance in the context of anti-tumor therapies that hope to target this cellular immortality because, in these particular cases, such treatments will prove ineffective.

In addition to this discovery revolutionizing the concept of cellular immortality of the tumor cell, the group of Anabelle Decottignies recently demonstrated, in collaboration with the team of Marc Francaux and Louise Deldicque (UCL), that physical exercise could directly impact on telomeres by stimulating the production of protective non-coding RNAs. These findings suggest that exercise may have a protective effect against the loss of tissue renewal capacity with age. Anabelle Decottignies' group also specialized in the study of an alternative telomere maintenance mechanism, active in certain tumors such as sarcomas and distinct from the embryonic mechanism. Understanding this alternative mechanism of telomere maintenance offers interesting new perspectives in antitumor therapy.

The Walloon Merit has been awarded annually by the Walloon authorities since 2011. It distinguishes "any person, or legal entity, whose talent or merit does honor to Wallonia to an exceptional extent and contributes to its influence". It has four ranks, depending on the scale or degree of confirmation of the distinguished merit: medalist, knight, officer and commander. 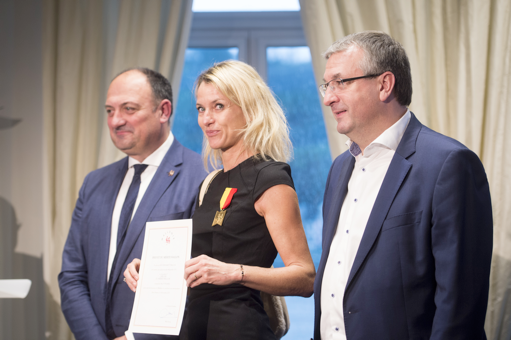