In the thyroid gland, thyroid hormone-producing cells, which control the smooth development and body metabolism, have a unique organization in small spherical bags, the follicles. These capture the circulating iodine and ensure the synthesis, storage and release of thyroid hormones. Researchers at the Cell Biology pole of the de Duve Institute have shown that the formation of thyroid follicles during embryonic life depends on the invasion of an undifferentiated mass of epithelial cells by blood vessels and a molecular dialogue between both populations. This work provides a better understanding of thyroid disease development.

The thyroid is composed of spherical structures, the follicles, that produce the thyroid hormones. 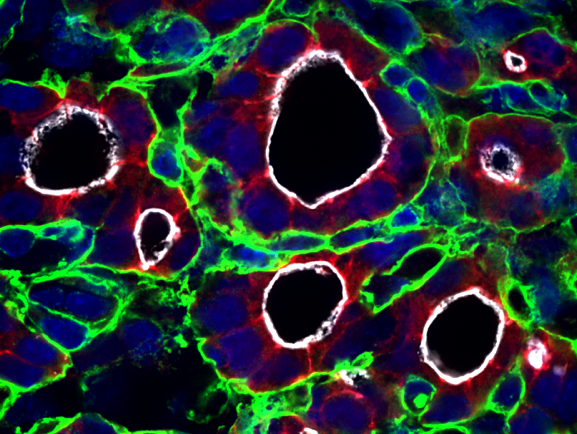 This picture corresponds to a section through a wild-type embryonic thyroid and shows several follicular structures composed of epithelial cells (red) organized around a central lumen (white) and delineated by a basal lamina (green).

These pictures correspond to sections through embryonic wild-type (left) and transgenic (right) thyroids. In the transgenic thyroid, epithelial cells (red) do not organize in follicles, as illustrated by the small lumina (white) and the poor assembly of the basal lamina (green).