Sophie Lucas, holder of a Francqui Chair,
at the invitation of the Faculty of Medicine of the University of Namur

Each year, the Francqui Foundation awards a certain number of "Francqui Chairs" on the proposal of Belgian universities. These chairs are intended to invite a professor from another Belgian university to give ten hours of lectures, including an inaugural lecture intended for a wider audience. These lectures are not considered as part of the teaching but rather as a complement, and are essentially aimed at presenting original research work. As part of the Francqui Chair 2020-2021, which is currently being held, the Faculty of Medicine of the University of Namur has invited Sophie Lucas, professor of cancer immunotherapy at UCLouvain and president of the de Duve Institute. In the past, other researchers from the Institute have also benefited from this recognition of the significance of their work.

Sophie Lucas acquired an M.D. degree in 1994 at the University of Louvain in Belgium, and a Ph.D. degree in 2000 for her work in the field of tumor immunology under the mentorship of Pr Thierry Boon. She identified and characterized novel genes encoding human tumor-specific antigens, some of which were used in clinical trials of therapeutic vaccination against cancer.

Her early post-doctoral work was devoted to studying new cytokines and cytokine receptors in the laboratory of F. de Sauvage at Genentech, a bio-technological company located in San Francisco (USA). In 2004, she founded her own research group at the de Duve Institute, located on the medical campus of the UCLouvain in Brussels. She became Research Associate with the FNRS in 2008, then Professor in Cancer Immunotherapy at UCLouvain in 2016. The long-term objective of her research is to identify molecular mechanisms by which regulatory T cells (Tregs) inhibit anti-tumor T cell responses, with a particular emphasis on the production of active TGF-ß1, a cytokine with potent immune suppressive functions. Her group recently identified a protein named GARP, which presents and activates the latent form of TGF-ß1 on the surface of Tregs. They derived monoclonal antibodies against GARP that block TGF-ß1 activation and immunosuppression by human Tregs and are currently investigating the possibility to use these monoclonals as a novel approach for the immunotherapy of cancer.

Previous holders of a Francqui Chair at the de Duve Institute 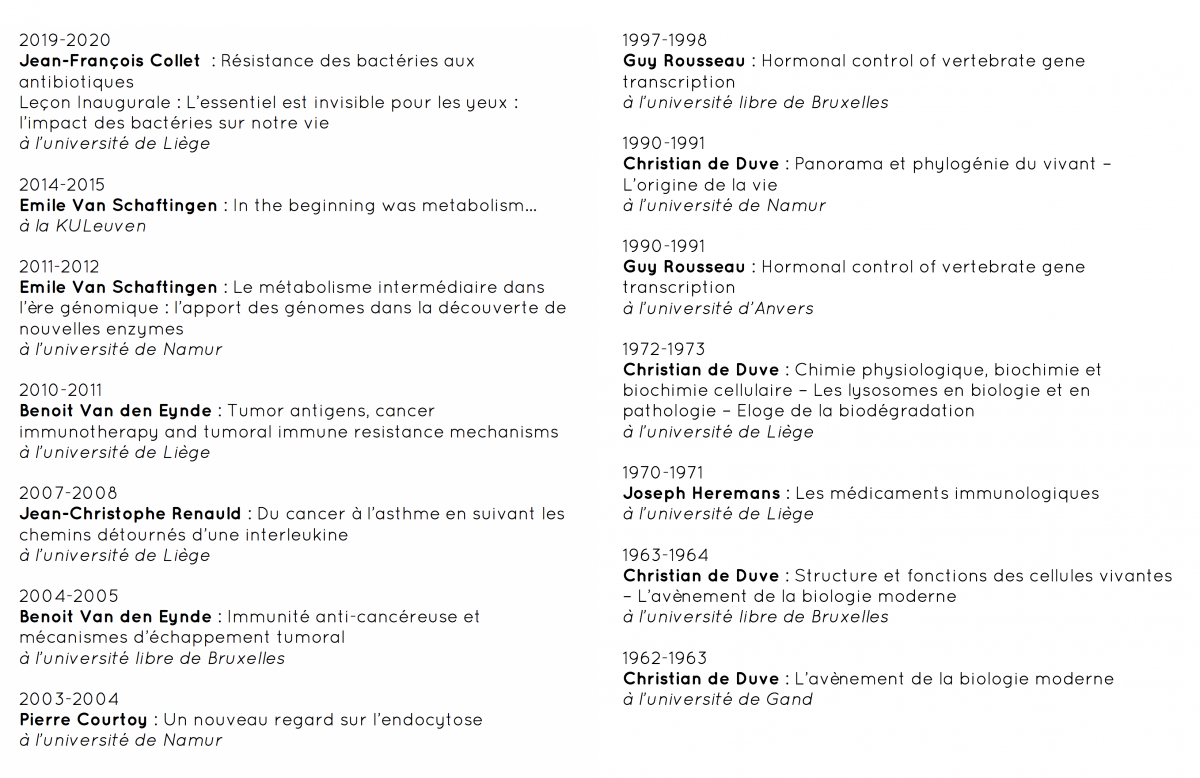