Maturity onset diabetes, also called type 2 diabetes, is characterised by hyperglycaemia (abnormally elevated blood glucose). It is the most common form of diabetes, reaching epidemic  levels and affecting more than 5% of the world population. Treatment of the medical complications associated with type 2 diabetes is a major challenge for public health and an economic burden for society. One of the causes of hyperglycaemia in type 2 diabetes is excessive glucose production by the liver, due to increased plasma glucagon. Glucagon is a hormone secreted by the pancreas which become inappropriately elevated in diabetic individuals. Glucagon action on the liver is mediated by its second messanger, cyclic AMP. The laboratory of Prof. Mark Rider at the de Duve Institute have shown that AMP-activated protein kinase (AMPK) implicated in metabolic control, antagonizes the effects of glucagon. They show that AMPK activation reduces cyclic AMP in the liver and in doing so could contribute towards lowering glycaemia. The findings published in the scientific journal "Nature Communications" March 2016, offer a new interpretation of the hypoglycaemic effects of metformin, the front line drug used worldwide for the treatment of type 2 diabetes and known to activate AMPK. Their studies offer perspectives for the development of new drugs to target AMPK activation in the liver to block hepatic glucose production, allowing improved control of glycaemia. 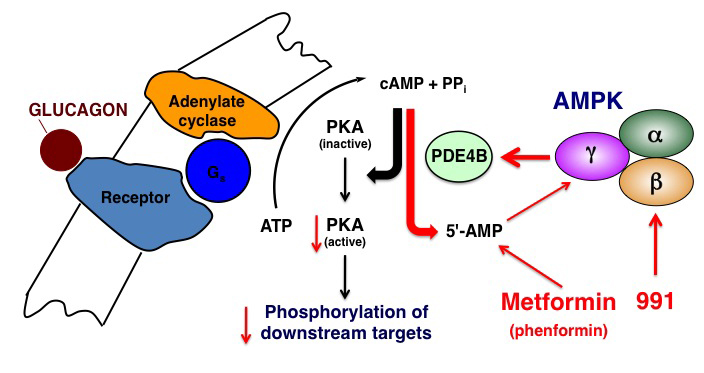 Mechanism by which metformin and compound 991 antagonize glucagon signalling

Unlike biguanides, treatment with 991 activates AMPK without increasing cellular AMP levels. Both biguanides and 991 activate the major PDE isoenzyme 4B in hepatocytes in an AMPK-dependent manner. Metformin and phenformin can activate hepatic AMPK via a rise in AMP. Phosphorylation-induced activation of PDE4B by AMPK reduces glucagon-stimulated cAMP accumulation. As a consequence, PKA activation by glucagon and downstream signalling are decreased in hepatocytes incubated with 991, the effect being AMPK-dependent.