A novel blood vessel disorder and its genetic cause discovered 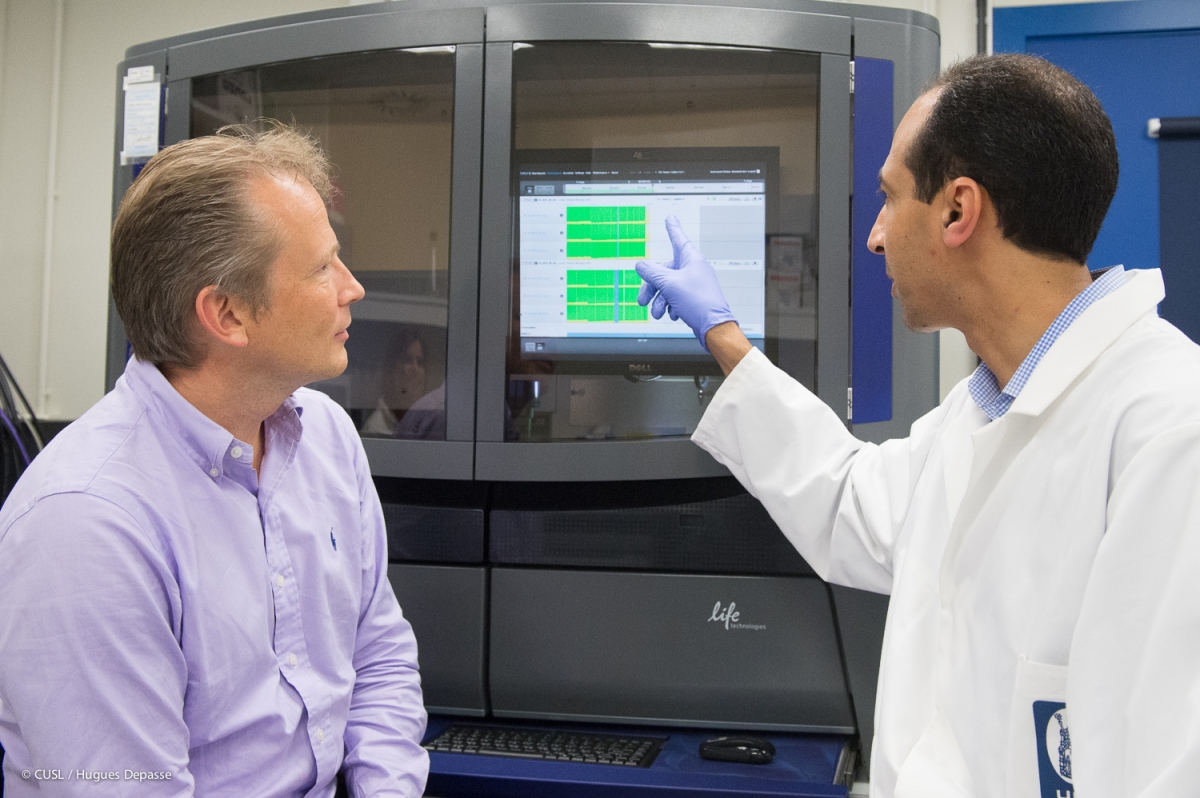 Researchers in the group of Prof. Miikka Vikkula of the de Duve Institute in close collaboration with the Vascular Anomalies Center (Prof. Laurence Boon) and the Center for Human Genetics (Dr Nicole Revencu), both at Cliniques universitaires Saint-Luc, discovered a new form of inherited vascular lesions that they named CM-AVM2. Affected persons have cutaneous capillary malformations (CMs, commonly called “port wine stains”), accompanied by arteriovenous malformations (AVMs). The latter can have severe consequences to the health of the individual.

They further discovered that this disorder is caused by mutations in a gene called EPHB4. EPHB4 is known to play an important role in the formation of blood vessels, and especially in the specification of arteries and veins. The mutations cause loss of function of EPHB4, thereby disturbing a signaling mechanism inside the cells that form the interior surface of blood vessels.

The researchers found the disorder by studying families in which capillary malformations existed in several individuals, suggesting that they could be caused by an inherited mutation. These individuals did not have a mutation in the RASA1 gene that the group had previously identified to cause CM-AVM1. In DNA samples from such families, they looked for genetic variants using the so-called Whole Exome Sequencing (WES) strategy on the bases of Next Generation Sequencing (NGS) on the UCL Genomics Platform (https://www.deduveinstitute.be/genomics-platform) and the Highlander, an in-house bioinformatics framework developed by Dr Raphaël Helaers, in the group of Prof. Vikkula. This led to the discovery of mutations in EPHB4 in a series of affected individuals. Subsequently, a larger cohort was specifically sequenced for this gene leading to the identification of 54 families (110 affected individuals) with an inherited EPHB4 mutation.

The affected persons in these families have pink-to-red capillary malformations (CMs), 25% of which have a pale ring around them. This is a sign for this inherited disorder, as common CMs do not have such a ring. In 18% of the affected individuals, a vascular lesion with fast arterial flow is also discovered. They are commonly located in the head and neck region, and sometimes in the central nervous system (brain or spine). CM-AVM2 individuals also often have small telangiectasias (threadlike red patterns) around the mouth and on the chest, which may help diagnose this disorder.

At the hyper-specialized Vascular Anomalies Center at Cliniques universitaires Saint-Luc, CMs are commonly treated by laser. However, the AVMs are much more difficult to manage. They cause chronic pain, life-threatening bleeding, functional impairment, and severe esthetic distortion. Surgery is possible for small and well-localized lesions. Sometimes, intra-vascular embolization (blockade of abnormal vessels by an injected product) by an interventional radiologist is an option. Patients with extensive lesions cannot be cured, and need life-long follow-up and repeated treatment. Discovery of the genetic basis of the disease allows specialized genetic counseling, and more importantly, gives the bases to develop medicines interfering with the dysfunctional signaling mechanism. Such an approach has already been performed by the group for a related disorder (venous malformation) with success.

The research was mainly performed by Dr Mustapha Amyere in the group of Prof. Vikkula at the de Duve Institute. The group cooperated tightly with the Vascular Anomalies Center (Prof. Boon) and the Center for Human Genetics (Dr Revencu), both at Cliniques universitaires Saint-Luc, and with over 40 clinics and research institutions from all over the world in this research. The results were recently published in the prestigious cardiovascular journal Circulation.