A Ludwig Cancer Research study led by Benoît Van den Eynde, Director of Ludwig Brussels, has identified a novel mechanism by which tumors of the aggressive skin cancer melanoma can resist cancer immunotherapy. Their paper, which appears in Nature Communications, describes how an immune cell recruited to the tumor induces the programmed suicide, or apoptosis, of the killer T cells harnessed by many immunotherapies. It also identifies the specific molecular interaction responsible for this effect. That interaction—between a protein on T cells known as FAS and its ligand produced by suppressive immune cells—could be disrupted to improve the efficacy of cancer immunotherapies.

“Immunotherapy has been delivering some impressive results, but only for a fraction of patients,” says Van den Eynde. “Now the million dollar question is, what can we do to improve the proportion of patients that respond to these treatments? There are a variety of mechanisms of immune resistance that operate in the tumor. This is what we are addressing in our studies.”

Researchers typically transplant tumors into genetically suitable mice to study the effects of immunotherapies. But such tumors do not reflect how cancers develop in people. To take root and grow, a tumor must evolve mechanisms over months or years to evade immune attack.

“That’s what happens in clinical situations and that’s what we want to model in our studies,” says Van den Eynde. “If you just inject a million tumor cells in a mouse to create a tumor, you do not recapitulate this process—the interplay between the host and the tumor, the immune response that starts but then gets dampened by the tumor, or the tumor’s ultimate escape from that response.”

To recapitulate that process, the Ludwig Brussels team engineered a mouse to express a cancer-causing gene and a cancer antigen known as P1A, but only when given a particular drug. The researchers then induced melanoma tumors in their model and evaluated the effects of a battery of immunotherapies. These included cancer vaccines against the P1A antigen, and various regimens of checkpoint blockade therapies, which unleash a T cell attack on cancer cells. None worked against the induced tumors. They then tried adoptive T cell therapy (ACT), in which T cells directed against a tumor are infused into a patient.

“To my great surprise, even injecting 10 million activated T cells specific to the P1A antigen did not affect tumor growth in this induced tumor model,” says Van den Eynde. When the same induced cancer cells were transplanted into mice to generate tumors, the T cell therapy invariably cleared the transplanted tumors.

To find out why, the researchers took a look at what happened to the T cells delivered by ACT. In both induced and transplanted models, they found, T cells were flooding into the tumor and ready to combat cancer cells. But, after that, their fates diverged significantly.

“We found that in the induced tumors, about half of the T cells were already apoptotic four days after ACT,” says Van den Eynde. “This explained why they did not persist: The induced tumor behaves like a sink for these T cells. That does not happen in the transplanted tumors.”

Since the cancer cells in both types of tumors were the same, the researchers compared the noncancerous cells present in the induced and transplanted tumors to explore what might be causing the T cell apoptosis. One type of cell, the polymorphonuclear myeloid-derived suppressor cell (PMN-MDSC), was present exclusively in the induced tumors. MDSCs are a family of immune cells that are known to support immune evasion in a variety of ways.

“This is a novel mechanism by which these cells suppress immune responses in tumors,” says Van den Eynde. “Targeting FAS-ligand could be a good adjunct therapy to boost the effects of immunotherapeutic drugs.” Such drugs, he notes, are already under development. Meanwhile, Van den Eynde and his team are already hard at work looking for the other novel mechanisms of immune suppression in their model. 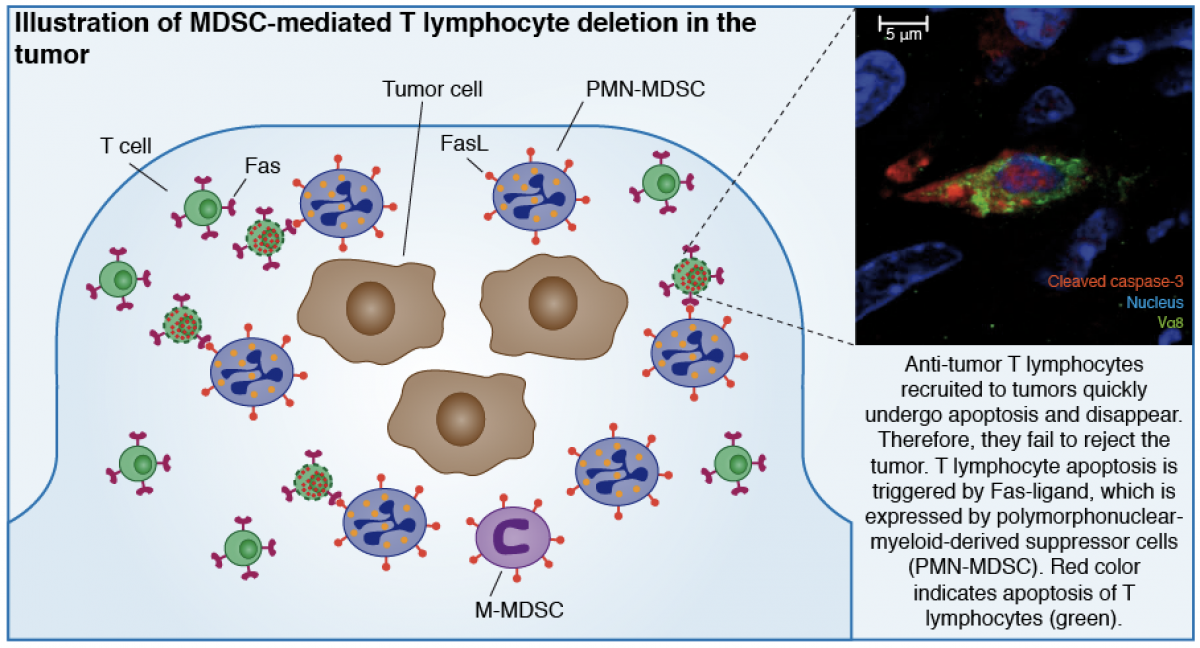 Resistance to cancer immunotherapy mediated by apoptosis of tumor-infiltrating lymphocytes

A mechanism responsible for the failure of immunotherapy