21 April 2016 – ARGENX announced today having signed a major deal with AbbVie in the field of immuno-oncology. This deal is the result of a highly productive collaboration between ARGENX, a biotech company, and the teams of Professors Pierre Coulie and Sophie Lucas of the Université catholique de Louvain (UCL) and the de Duve Institute, who have an international reputation in the field of immuno-oncology. This collaboration has resulted in an innovative therapeutic approach to stimulate the immune system of cancer patients.

The license agreement between ARGENX and Sopartec, the technology transfer office of the UCL, allowed ARGENX to sublicense its rights to the outcome of the collaboration with UCL. The terms of the sublicense agreement include upfront and milestone payments as well as royalties on future product sales.

The expertise and research of the teams of Professors Pierre Coulie and Sophie Lucas, as well as their close collaboration with ARGENX, were key for the conclusion of this agreement.

The research underpinning the collaboration was initiated in 2004 at the de Duve Institute and at the Ludwig Institute for Cancer Research (LICR), and was partially financed by WELBIO. It led to the identification of a new immuno-oncology target. This target is a protein known as GARP. Inhibition of GARP stimulates immune responses and could thus represent a novel approach for cancer immunotherapy.

The collaboration between the teams of the de Duve Institute and ARGENX started in 2013 in order to identify human antibodies that inhibit GARP function. A human anti-GARP antibody candidate has since been selected for further development.

Professors Pierre Coulie and Sophie Lucas comment: "This collaboration brings in the know-how of ARGENX and their partner ABBVIE to carry our recently discovered approach of cancer immunotherapy into clinical development ."

Vincent Blondel, rector UCL highlights that « The success of this technology transfer demonstrates the top quality research conducted by the teams of UCL and de Duve Institute. The close partnership developed with LICR and WELBIO opens new avenues for potential novel therapies for cancer patients.”

Philippe Durieux, co-director of the Louvain Technology Transfer Office and CEO of Sopartec, adds : « We are extremely pleased to collaborate with ARGENX and AbbVie in the clinical development and commercialization of immunotherapeutics. This collaboration is at the heart of our mission : detection and transfer of new technologies and innovative therapeutic interventions to combat diseases such as cancer. »

GARP is a protein present on the surface of regulatory T lymphocytes (hereafter « Tregs »). The function of Tregs is to inhibit immune responses in order to prevent unwanted auto-immune disorders. But in patients suffering from cancer, Tregs play a negative role by suppressing immune responses needed to destroy cancer cells. GARP allows Tregs to execute their immunosuppressive action by triggering the production of an inhibitory messenger, a cytokine known as “TGF-ß”. The team of Sophie Lucas has developed a compound that blocks GARP, thus preventing the release of the Treg messenger and the inhibition of anti-tumor immune responses. This compound could serve as a novel immunotherapeutic approach for cancer. 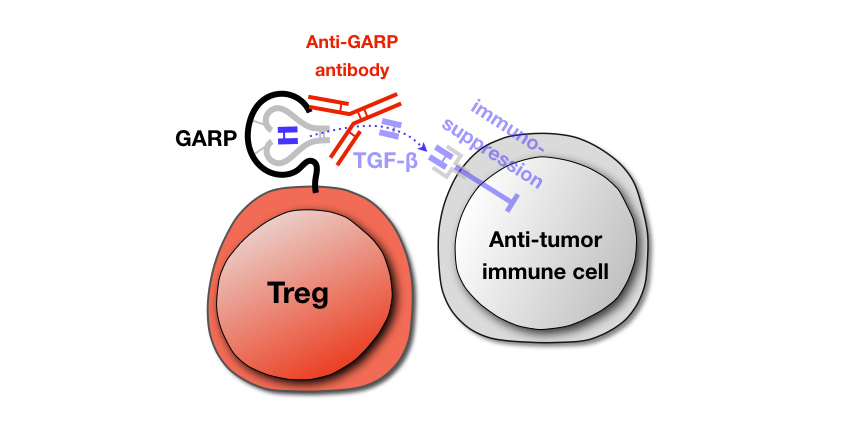