The GSK Prize from the Academy of Medicine, awarded every 2 years, recognizes work in the fields of vaccinology and immunology that contributes significantly to basic or clinical knowledge and, possibly, has an impact for the patient. For the 2019 edition, Sophie Lucas and her team were rewarded on December 14 for research  on tumor immunology carried out in their laboratory over the past 10 years.

Sophie Lucas, a researcher at the de Duve Institute, studies the immune responses that cancer patients can develop against their own tumor. "In the long run, our goal is to try to manipulate these immune responses to make them more effective and enable the patient to reject tumor cells. This would be an incredible breakthrough in the feld of immunotherapy, which is itself an ideal alternative to cancer therapies that target tumor cells, such as chemotherapy or radiation therapy. Immunotherapy, on the contrary, targets the cells of the immune system, in order to stimulate them to turn against the patient's tumor and destroy it.

The second step: Sophie Lucas' team understood how Tregs managed to decrease the effectiveness of anti-tumor immune cells, which is through the production of an inter-cellular messenger (TGF-beta) that transmits information from Tregs to other cells. This messenger has the ability to inhibit anti-tumor immune cells, thereby reducing their effectiveness. In 2009, the team realized that the Tregs needed another molecule to produce these messengers. A sort of accomplice, called GARP. Thus, in just a few years, Sophie Lucas’ team identified Tregs, TGF-beta and GARP as three major players that decrease anti-tumor immune responses.

After tests in mice, the UCLouvain team observed that the administration of an anti-GARP monoclonal antibody could cure cancer in mice. "The results of these tests aren't published yet," says Sophie Lucas. "However, it seems that this drug works in mice. The administration of this antibody succeeds in inducing the rejection of certain tumors." This promising discovery attracted a pharmaceutical company's interest. "Human clinical trials have just started. A few cancer patients have just been injected with our anti-GARP monoclonal antibodies," said Sophie Lucas.

What's next? If clinical trials yield encouraging results, the team will have access to biopsies taken from patients treated with the new drug. "That’ll be the moment to confirm whether it works and try to foresee combining it with other anti-tumor drugs to improve effectiveness." In addition, the team will continue to work on the fundamental aspects of the biology of TGF-beta and GARP. "We know that cells other than Tregs produce these "messengers" via GARP, but we don't know what for." Is it to systematically decrease the immune responses? Or do these actors play other roles? "To better understand the biology of this set of amazing molecules, we will expand our area of expertise, which is currently focused primarily on cancer, to chronic infections or autoimmune diseases, for example," adds Sophie Lucas. When could an effective drug appear? "It will take another 3 to 5 years to see if our drug shows signs of efficacy without excessive toxicity for cancer patients," says Sophie Lucas.

More details about this research in ScienceToday 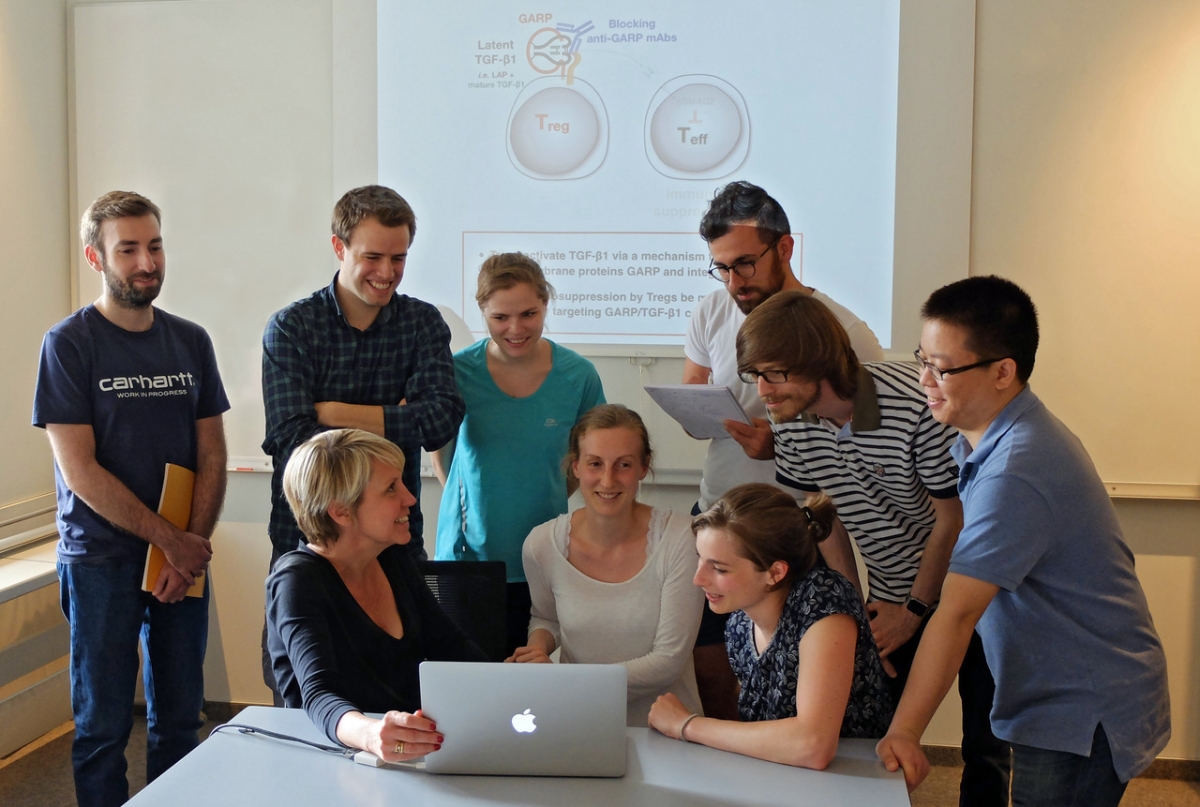 The GSK Vaccines Prize of the Royal Academy of Medicine