In collaboration with the group of Marc Francaux and Louise Deldicque (Institute of Neurosciences, UCL), the team of Anabelle Decottignies identified a new regulatory mechanism for the transcription of telomeres, the DNA sequences that are located at the very end of our chromosomes and get eroded with age, thereby triggering senescence of cells and tissues. Mechanisms of telomere protection exist and their stimulation may possibly protect against aging-related dysfunctions of tissues. A few years ago, it became evident that telomeres are not "silent" but transcribed into non-coding RNA species, dubbed TERRA, that play multiple protective roles at chromosome ends. 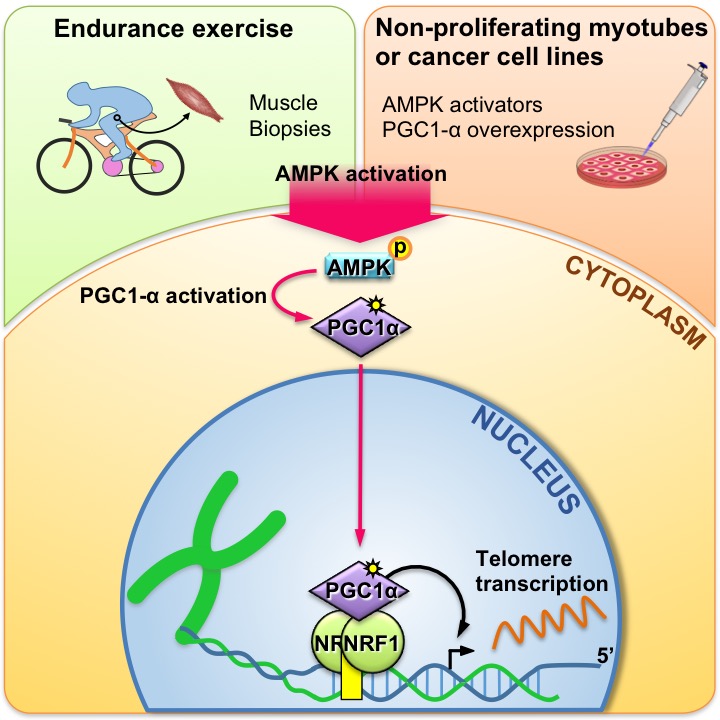 The research teams from both the de Duve Institute and the Institute of Neurosciences showed that physical exercise boosts TERRA production and, therefore, exercise is likely to contribute to the renewal of telomere protection molecules. Actors involved in this mechanism include the AMPK-dependent metabolic pathway, PGC-1a regulator and NRF1 (Nuclear Respiratory Factor 1) transcription factor. Of note, the AMPK/PGC-1a axis is also involved in the response to caloric restriction, a well-established condition known to protect against cellular aging.