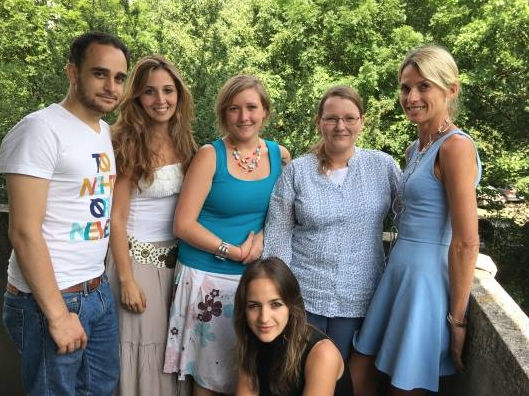 For more than 15 years, Anabelle Decottignies, FNRS Research Fellow at the de Duve Institute, has been interested in telomeres, structures found at the ends of every chromosome. ‘These specialised structures protect the ends of chromosomes,’ she explains, ‘but sometimes they malfunction and open the door to cancer, which is why we’re interested in them.’

Our DNA gets roughed up every day

Gaining a better understanding requires studying the mechanisms that cause cancer, that is, the attacks on our DNA. Every day, the DNA in our cells sustains damage no fewer than 60,000 times, owing to pollution, radiation from the sun and simply living and breathing. ‘Fortunately, most of this damage is immediately repaired by our cells’, Dr Decottignies explains. ‘However, our cells’ repair systems aren’t infallible and some damage persists. Over time, it accumulates and ends up creating mutations. And it’s the accumulation of mutations in our genome that increases the risk of cancer. This explains why ageing is the most influential factor in cancer cases.’

Nevertheless, nature did well to endow us with mechanisms that impede the development of cancer. Currently, two defence systems are particularly well known by scientists. ‘The first is cellular ageing: our cells have a biological clock that, throughout the process of cell division, gradually counts down to a state called senescence. Cells gradually diminish their activity. This biological clock is located at the end of each chromosome, on telomeres: over time, cell divisions shorten telomeres and when their length shortens past a certain threshold, the cell engages its senescence programme which renders it resistant to cancer.’ But this system doesn’t always work. Indeed, some mutations can prevent the cell from engaging this senescence programme. The result is that the cells, rather than slowing their activity, continue toward a cancerous fate.

Nature also provided for a procession of cellular death. Cells that escape the ageing programme are quickly intercepted by a second protective system. ‘These cells, being relatively old, that is, they’ve already undergone many cell divisions, have extremely short telomeres. When the telomeres shorten to a critical length, the cell dies. So most cells that get past the first protective system are stopped by the second. If these multiple protective systems didn’t exist, the cancer rate would be much greater.’ Only a few rare cells that escape both of these protective mechanisms acquire mutations that enable them to activate the maintenance of their telomeres. In approximately 90% of cancer cases, telomerase, the embryonal enzyme that can lengthen telomeres, is reactivated. They then become immortal and can induce cancer.

Zooming in on melanoma

Aware of the role of telomeres in the development of cancer, researchers on Dr Decottignies’s team zoomed in on their involvement in melanoma, the most dangerous form of skin cancer. To learn more, they analysed approximately 15 tumours collected from melanoma patients by the Ludwig Institute. This led to a surprising discovery: ‘These analyses enabled us to observe that what we thought was true for all cancers is not true for melanoma: this type of cancer seems to be able to develop in ‘young’ cells, those that have long telomeres. This characteristic enabled them not only to evade the first protective barrier imposed by cellular ageing on cells with shortened telomeres, but also spared them the second during which mass cell death is activated in response to extremely short telomeres.’

The results obtained by UCL researchers demonstrate that individuals genetically programmed to have longer telomeres than the average for persons of the same age are more likely to develop melanoma, whereas for almost all other cancers, the opposite situation is observed. ‘Indeed, ordinarily, people genetically programmed to have telomeres shorter than the average of those of the same age are at greater risk of developing cancer. And for good reason their cells age more quickly.’ This was confirmed by the Australian group of Professor Roger Reddel of Sydney’s Children’s Medical Research Institute. The group arrived at the same conclusions by analysing neuroblastomas, a childhood cancer that takes root in immature nerve cells of the sympathetic nervous system (neuroblasts). The work of both teams was published in the same issue of Cell Reports.

These observations bring into question how to treat this type of cancer: it seems useless to propose a treatment that targets telomerase, as is the case for other cancers. ‘Furthermore,’ Dr Decottignies concludes, ‘protecting children from the sun is vital because, in the case of melanoma, it’s the sun rather than age that  is the greatest risk factor.’