The laboratory of Jean-Baptiste Demoulin analyzes the signaling pathways that promote cancer cell proliferation. Recently, the team made significant progress in understanding infantile myofibromatosis, by showing that these life-threatening tumors are caused by mutations in the PDGFRB receptor. These results led to the identification of a treatment. The team also works on different projects on leukemia and lymphoma.

Growth factors stimulate cell proliferation during the embryonic development and tissue repair in adults. This process is hijacked by cancer cells to proliferate in an uncontrolled manner. Growth factors bind to specific receptors at the cell surface. The receptor signal is transmitted to the cell by a cascade of enzymes. Among these enzymes, tyrosine kinases play an important role by adding a phosphate tag to intracellular proteins.

The Demoulin laboratory focuses one of these growth factors, namely PDGF (for ‘platelet-derived growth factor’ because the protein was initially purified from platelets). This factor binds to a cell surface protein that acts as a receptor and triggers tyrosine kinase signaling. Mutations in this receptor-tyrosine kinase are responsible for different types of cancers and leukemias. The mechanisms whereby this receptor stimulates cell proliferation are complex and only partially understood. Hence, the aim of the laboratory is to better understand how this class of receptors works.

The signals transmitted by these receptors influence the activity of transcription factors, which control gene expression in cells. This process can be studied thanks to DNA microarrays or next generation sequencing techniques, which allow the measurement of the expression of all genes at the same time. Using this technology and bioinformatics, the laboratory identified new mediators of cell proliferation in response to growth factors.

A drug named imatinib (Glivec®) is a potent inhibitor of the kinase activity of PDGF receptors. Some cancers with PDGF receptor mutations can be treated with imatinib or related tyrosine kinase inhibitors. The efficacy of this molecule depends on the mutation type. In collaboration with University Hospital Saint-Luc, the lab looks for novel PDGF receptor mutations in patients and analyzes whether these mutations are sensitive to the available drugs. The research area has potentially immediate clinical applications for the patients who carry sensitive mutations. The analysis of the mechanism of mutated receptor activation will facilitate the development of new therapies for resistant mutations.

PDGF receptor dysfunction may cause other diseases (unrelated to cancer), such as atherosclerosis, fibrosis and some neurological disorders. Jean-Baptiste Demoulin contributed to research on some of these diseases in collaboration with other specialized teams. 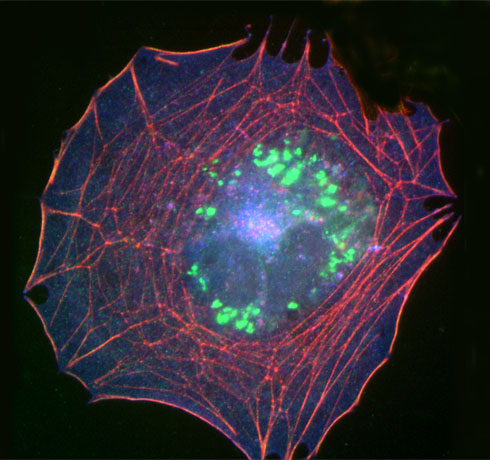 Jean-Baptiste Demoulin has a long standing interest in platelet-derived growth factors (PDGF) and other related growth factors that act via receptor-tyrosine kinases. These proteins play important roles in the development of the embryo, as well as in cancer and fibrosis. There are four PDGF isoforms, named A, B, C and D, which forms homo- and heterodimeric ligands. They bind to two highly homologous PDGF receptors, named alpha and beta, which are encoded by two genes, PDGFRA and PDGFRB, respectively. 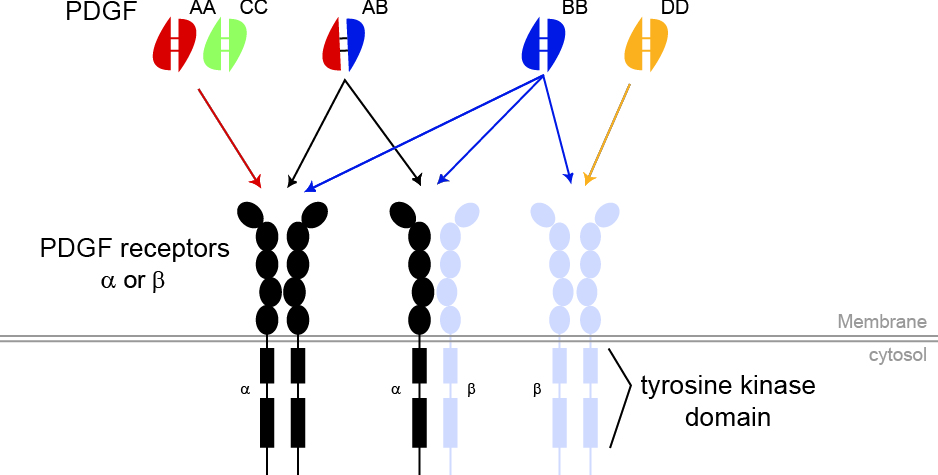 The Demoulin laboratory analyzes how signaling cascades activated by receptor-tyrosine kinases affect transcription factors and gene expression, using techniques such as microarrays, sequencing, classical molecular biology and bioinformatics. Regulation of transcription factors, such as FOXO and SREBP, by the phosphatidylinositol 3-kinase pathway is particularly studied in the context of cell growth. Recently, the role of micro-RNA (miR), as modulators of gene expression and cell proliferation, was also investigated. 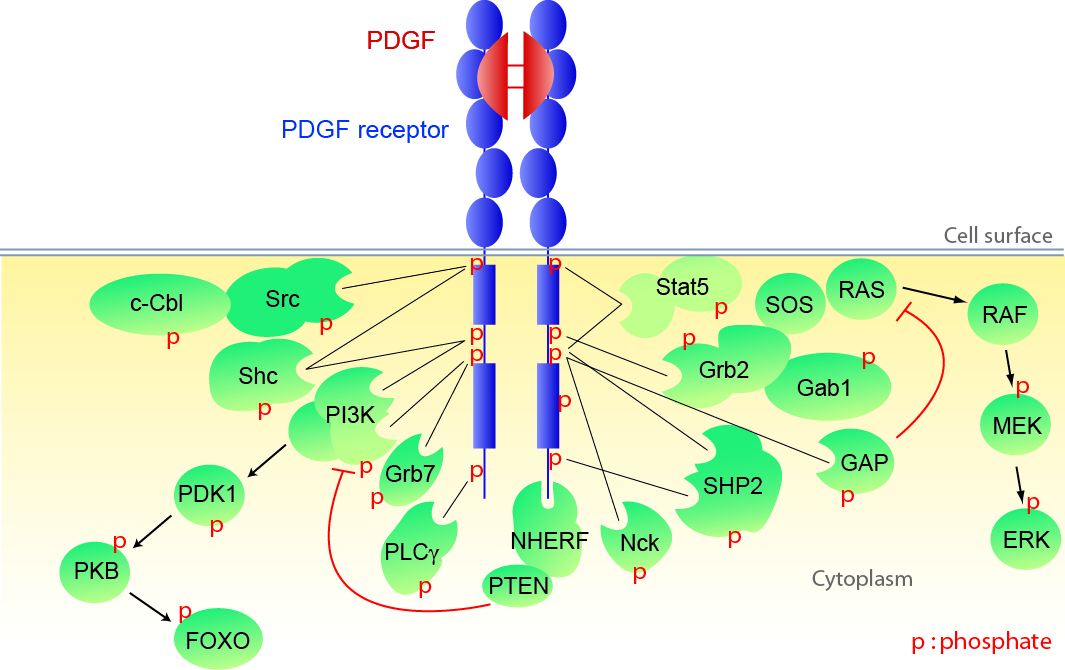 Mechanisms of receptor-tyrosine kinase activation in cancer and in other diseases.

Receptor-tyrosine kinase genes are frequently altered in cancer cells, resulting in their constitutive activation. These receptors are switched on by point mutations, deletions, amplification or fusion events caused by chromosome alterations. Some mutants are sensitive to tyrosine kinase inhibitors. 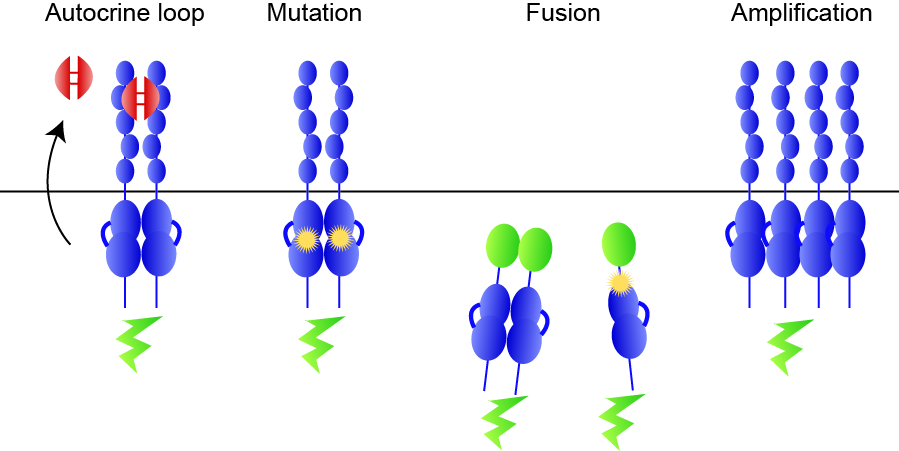 Recently, the Demoulin laboratory has identified PDGFRB mutations in myofibromatosis, which is a severe disease characterized by multiple soft tissue tumors affecting young children. The mutations were shown to activate the receptor constitutively. Most of them are sensitive to imatinib, a tyrosine kinase inhibitor, which may be a promising treatment for this disease.

Gene fusion involving PDGF and FGF receptors are found in myeloid malignancies associated with hypereosinophilia. The team has studied the mechanism whereby these translocation products stimulate cell growth and differentiation into eosinophils by introducing mutated receptors in hematopoietic progenitors isolated from human umbilical cord blood. In collaboration with the hospital hematology unit, new fusion genes are also being characterized.

PDGF receptors may also play a role in other diseases such as atherosclerosis, fibrosis, scleroderma and some neurological disorders. The team has studied some of these diseases in collaboration with other specialized research groups.

a discovery by the team of Jean-Baptiste Demoulin